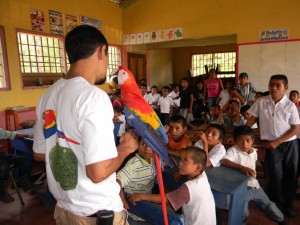 ” Guaras En Libertad La Belleza Regresa” (Parrots in Freedom Beauty Returns) is a conservation project begun in 2011.  The Copan Maya Foundation has funded the educational component of this project has benefited over 6000 school children throughout the Copan Valley.  One hundred thirty four schools received the conservation education about the importance of protecting the Scarlet Macaw the national bird of Honduras.  The nine educational modules (Spanish) are available in PDF form through this website and are free.  This project is the most successful of its kind and has attracted worldwide attention.

Renovation and addition of eleven new exhibits at the Casa K’inich Children’s Museum was finished in 2012.  Casa K’inich opened its doors in 2002.  Unfortunately due to the Covid 19 Pandemic Casa K’inich has been closed since March 2020.

Scanning of Eccentric Flints which were originally discovered in the Rosalila Temple over 20 years ago.  New technology has peaked new interest in past projects and the Copan Maya Foundation funded this important project.

Protecting Sacred Space  written by Ricardo Agurcia Fasquelle, Payson Sheets and Karl Taube was published in 2016 about the Rosalila eccentric flint chert cache discovered in the Copan Valley.  The book is available through Amazon and is also available as a PDF through the Mesoweb Website.

Project Oropendola: The Copan Maya Foundation provided emergency funding to the Oropendola Project which had come to a standstill after years of work due to major political unrest in the central government. A large amount of tunnel consolidation work had been finished and a small section remained. The project could not continue because the new government was left with a major fiscal disaster. International aid had been frozen and time was running out because the project was due to shut down in less than six months. Copan Maya Foundation provided the necessary funds to complete consolidating the tunnels and also many delicate conservation tasks. A conservator was obtained for two months to finish much of the restoration of ceramic vessels removed from Tomb 08.01 under the Oropendola Temple. During this time a journalist from Archaeology Magazine arrived to do research for an article. The exclusive article became the cover story of its September/October 2009 edition. Because of funds provided by Copan Maya Foundation years of work that would have been lost were rescued and the fifth-century tomb was presented to the world through this article.

Expansion of Casa K’inich: Unique in the Maya world, the Casa K’inich has been lauded by articles in many international magazines and newspapers and has garnered attention from the directors of the World Bank.  Casa K’inich was expanded to three times its original size and re-inaugurated on March 25, 2008 in Fuerte Cabanas, a rescued refurbished building overlooking the Village of Copan.  Entrance is free to all children under the age of 18 and adults pay L20 ($1.25).  At present the museum is closed due to the COVID 19 crises.

Find out how Copan Maya Foundation has been making positive change in this part of the world since 2000 by clicking on Foundation News. Gather information about visiting modern and ancient Copan at Visit Copan.